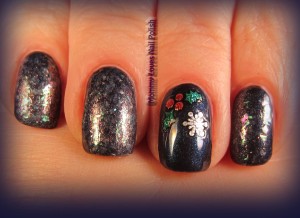 Revlon Brilliant Strength is a favorite of mine, when it comes to drugstore polishes.  Here in Canada, they go for about $6-$7 (so, not super cheap, but not too expensive).  My latest Brilliant Strength acquisition is called “Beguile”.

Beguile is a very deep blue with hints of purple and the occasional green (in the right lighting) – very cool.  Application was good – two coats and done – not streaky at all, no bald spots – just like the color in the bottle.

Next, I added a couple of layers of one of the Silly Lily Polishes I received the other day “Swamp Juice“.  The super duper nice thing about this one was…it was free 🙂  Silly Lily has a promotion on, where you receive a bonus with every order placed…and mine was Swamp Juice!

As expected with any polish that has glitter and flitter and other shiney things…it was thick and a little chunky.  But not lumpy.  So, while it was quite thick to apply, there were no problems with smoothing it out after with top coat.

The description of Swamp Juice…I have no idea how to describe it, so right off of the Silly Lily description “Made with blue/green flakies blended with a rusty purple shimmer”.  Yes…that would be how I would describe it, if I had time to think about it 😉  Whatever the description in type – the way it looks over the navy polish is awesome 🙂

And last, but very not least – I added some adorable Christmas stickers from my Bloggers sample pack (go get one!!  They’re free!!) from Viva La Nails.

Have a great weekend!! 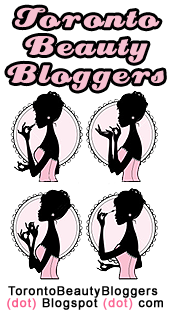